Session 3: What’s coding got to do with it?

This week’s session was action packed, and intense, and all the go_girls and staff worked hard to challenge some of the notions of what coding is and how to think about it, and to push the boundaries of their comfort.

The session started off on a somber note, with a discussion about the events that had unfolded in Manchester . The staff were keen to hear the young womens’ thoughts and help them work through any anxieties they may have, and develop more positive thinking with them. After a very deep, reflective and interesting conversation, the focus turned to the activities of the day, starting with learning how to give a speech! Using an activity from ToastMaster’s , Anne provided the go_girls with prompts on forming a speech on a randomly chosen topic. The young women, despite an initial hesitation, all rose to the challenge, overcoming anxieties that would have held them back in other spaces! It was so exciting to see the go_girls step up to the challenge and perform so well.

After a much needed break, Niall introduced the go_girls to the idea of psedocoding again, following up from last week’s exercise with stacked cups.Using the analogy of making a cup of tea, he walked all the go_girls through writing a “program” to make a cup of tea. The girls intitially were bemused as to why they were thinking about making a up of tea, and what coding had to do with it, but part of today’s exercises was to reinforce the ideas introduced last week – that coding was more than just “sitting at a computer” , and that there were ways to think about coding in the most routine of activities. Creating the code for making a cup of team involved thinking about making the cup of tea as a sequence of actions, which would form the code- an introduction to the idea of sequential thinking. After Niall and Paula walked the go_girls through some of the concepts of syntax, and thinking about a sequence of actions as code, Niall challenged the go_girls to write their own programs to make a cup of tea: 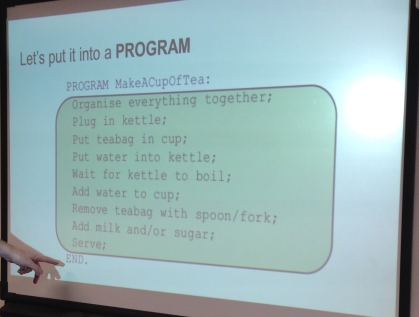 As you can see from the pictures, the young women embraced the challenge magnificently, and then proceeded to write “programs” for other routine activities – Ebonnee, for example, wrote a piece of code to describe how to brush one’s teeth. Charlotte chipped in with her program on how to arrive at go_girl sessions.

This exercise was followed up by a brief session on knitting that was led by Ashmita and Anne, to once again reinforce the idea that codes and patterns can be seen everywhere, and that knitting was an example of coding. Following a pattern for a particular knitted item was like executing a program, as the pattern was essentially code for the knitter. The young women were intrigued by the idea, and really excited to get stuck into learning how to cast on and then knit! As you can see from the session on Wednesday , the young women made excellent progress:

The go_girls from both sessions came together to go out for dinner together. Dinner was at Al-Shami, a Lebanese restaurant in Jericho, Oxford. It was a great opportunity for all the young women to come together and try something new in a more informal setting, and a great time for both staff and the go-girls to get to know one another a bit more outside of the weekly sessions, and just be a little silly!